I’ve now acquired all the Di2 pieces necessary to test the system on the bench.  Here’s a little info on each component.  Prices, dimensions and weights are in the parts list.

Even though I could have acquired most of these parts through Amazon, I wound up using Bike Touring News instead.  The only premium I paid was sales tax, fair enough.  BTN doesn’t have experience with Di2 but the Bike Hermit has been super helpful in other areas like generator lighting.  Don’t forget your LBS! 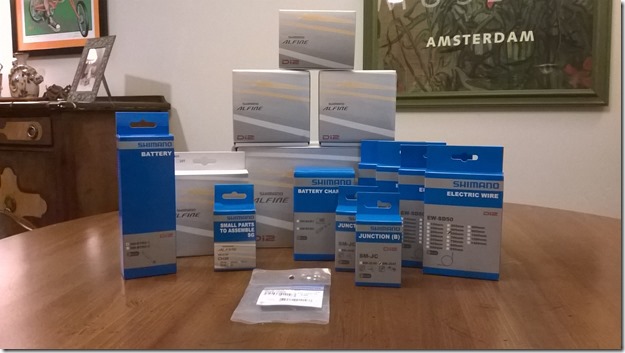 The future of shifting

The hub comes with a silver metal dust cover (shown installed on the hub), a plastic ring that snaps over the knurled plastic lock ring, a rubber cover for the Centerlock disc brake spline on the non-drive side of the hub, and a knurled metal ring whose purpose is anyone’s guess.  The picture shows a white plastic clip that holds the dust cap in place during shipment.  This is removed when the cog is installed. The “User’s Manual” that comes with each part is absolutely useless.  The Dealer’s manual covers the entire system and has useful information. 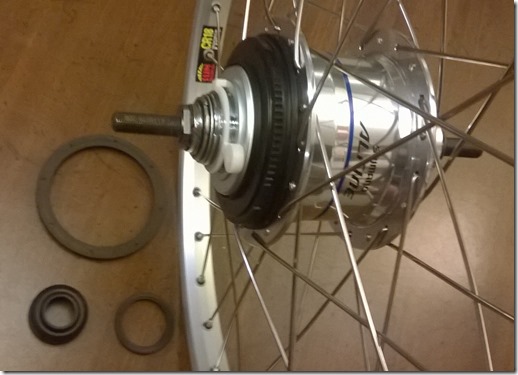 This is the standard Alfine sprocket, intended primarily I think for non-electronic shifting.  Installed with Di2, the black plastic cover rides right next to, and is mostly covered by, the motor housing.   I won’t know until the first test ride but it might actually rub against the motor housing, though probably not enough to be a problem.  Next time around I might opt for a cog without the cover.

As expected, the cog itself feels like rather cheap stamped steel instead of the nice forged aluminum of mid-range cassettes but I’m sure it will do the job.  I’m definitely not a fan of the attachment method—a steel lock ring.  It’s a pain in the butt to install and remove.  It also leaves an initially alarming amount of side-to-side play but this is completely eliminated once the motor is installed.

Update: The CS-S500 sprocket is not intended for a Di2 configuration.  It sort of works but the chain guard rubs against the motor housing, causing excessive friction that makes it hard to back-pedal and preventing the motor lock nut from seating properly.   I made the cog work by removing the chain guard but a better choice would have been to get one of the SM-GEAR sprockets called out in the SG-S705 product specs.  I haven’t seen these sold anywhere online however. 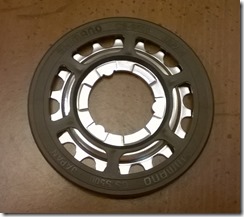 Includes nice (heavy) chrome cap nuts and anti-rotation washers for attaching the hub to the dropouts and a lock ring to hold the sprocket in place.  Unlike, say, a DualDrive hub, the orientation of the axle and the nub on the anti-rotation washers are not in line, so left and right matter for these washers, even with vertical dropouts.  Blue is right, green is left.  Their choice of color-coding seems rather arbitrary, I’ll have to remember it’s backward from the standard for aircraft anti-collision lights which would have put green on the right side.

According to the E-Tube Project software and some other documentation I’ve read, the 11 speed motor can be programmed to work with an 8 speed hub.  I don’t think the reverse is true but the prices I’ve seen are about the same so I’m not sure why they even bother with an 8-speed-only version.

I think the motor came with another E-Tube plug.  Or maybe it was one of the other components, I’m not sure.  Between all of the components purchased on this page, I wound up with two plugs. The motor comes with a rubber gasket, shown installed in the left picture, and a mounting nut shown in the right picture.  Aside from some difficulty with the sprocket lock ring, installing the various pieces to the hub was very simple.  See picture at the bottom of the page for all of the parts involved. 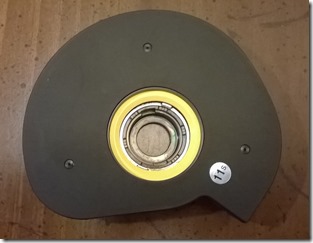 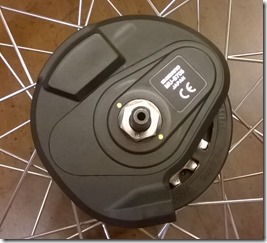 I could never tell from the pictures I saw whether this was one button that moved two ways or two buttons, and this picture is no exception.  It is actually two buttons.  By default the big, obvious button shifts up.  The plastic around the button is hinged on the left (you can barely see the hinge in the picture)—you press it on the right side to shift down.  The E-Tube Project software can be used to, among other things, reverse the action of the buttons.  The cable plugs into the display unit.  I intend to find out whether it will work plugged into the SM-EW90 A or B Cockpit Junction Box (probably yes) or directly to the internal routing junction box (probably no).

To my surprise, the switch came with a plug tool, used for connecting cables to the ports.  Now I have two.

Note that the way I have it mounted makes no sense, I just wanted to show it attached to a handlebar for scale.  I’ll post pictures when I get it mounted properly.  I think it will work pretty well as a thumb shifter on a typical upright trike handlebar. 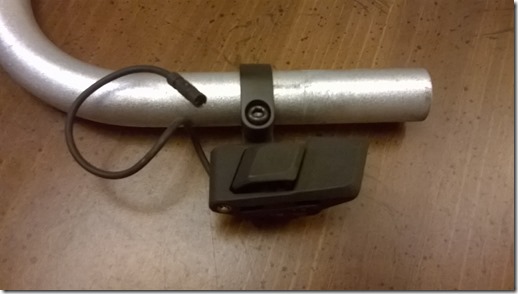 The display is a required piece of the Alfine Di2 system because it includes the charging/programming port and is the component to which the shifter connects.  It’s possible that the display could be replaced with an Ultegra Di2 cockpit junction (A or B) if you didn’t want a display (I’m debating this right now) but I haven’t confirmed it.

That said, the display is very nice.  It’s small, solid, and shows the selected gear as well as the battery’s state of charge.  The display quality is excellent– it looks paper-white against a completely black background with no pixilation or fuzziness of any kind.  Very crisp, my pictures really don’t do it justice.  The display turns on when a shift button is pressed and turns off after a pre-programmed period of time (300 seconds by default).

An inevitable flaw with a display that draws enough power to require that it be turned off is that it may well be off when you need it most: when you’re beginning a ride and don’t know what gear you left it in.  But I guess it’s easy enough to shift once to bring up the display, and with a long enough timeout it will probably remain on for the duration of the ride.

Another concern that makes me question whether I want to use the display is that it’s very bright.  At night, mounted above my trike’s derailleur tube out in front, it may be a pretty big distraction.  We’ll see.

And then there is the mysterious, ever present “M”.  See my Di2 FAQ for an explanation of that annoyance. 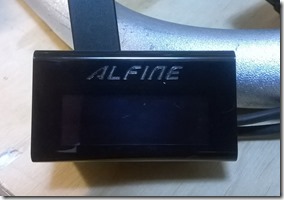 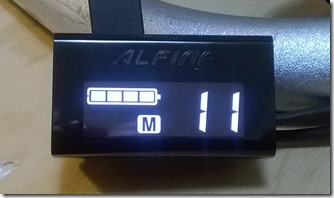 This passive junction box connects power and data together for up to four E-Tube cables.  To keep the system waterproof, unused ports need to be plugged.  Two E-Tube plugs are provided with other Di2 components. I purchased two junction boxes because I need to break the Di2 connections where the trike frame detaches in the front and rear.  I haven’t tested yet whether it works to run two junction boxes inline but I expect this won’t be a problem. 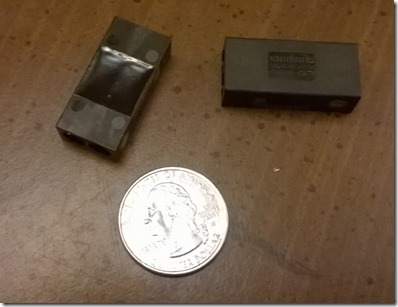 A 7.4v 500mAh lithium ion battery designed to fit inside the seatpost of a conventional bike.  I can’t be sure but I think the –2 version of this battery might include a level of charge indicator, but this one doesn’t.  It doesn’t need to because it’s intended to be used with the display that contains a charging port and charge indicator, and is not intended to be removed. It comes with an E-Tube plug that can be used to plug unused ports in other parts of the system.  It also comes with various washers and spacers that I probably won’t use. 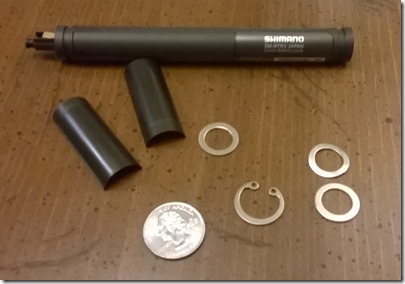 This is nice (and expensive) waterproof, two-conductor cable that carries power and data between the components.  The connectors are installed with a special plug tool and seat with a satisfying click. 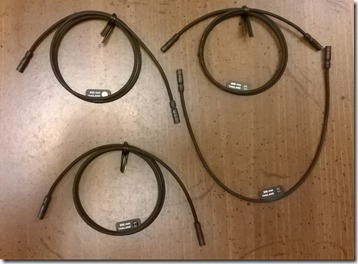 A small, light USB charger.  One end connects to a USB port (computer or wall, though my desktop computer wasn’t able to charge the battery) and the other connects to a port on the display unit.  It charges the battery without having to remove it and also connects the E-Tube Project software to the components for firmware upgrades and configuration.  As far as I can tell the only thing it doesn’t do is the “Error Check” functionality in the software.  For that you need the SM-PCE1 System Check and Programmer.  I don’t think I’ll bother. 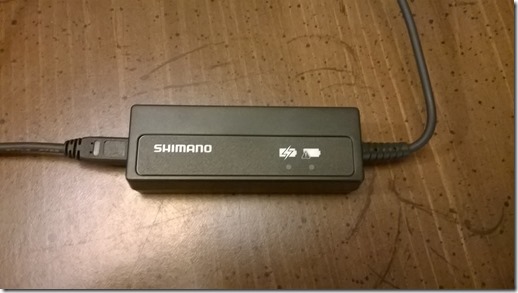 I didn’t realize one of these comes with the shifter switch so now I have two. 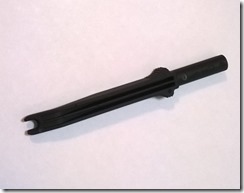 The following picture shows all of the parts that go on the drive side of the hub, roughly in order.  Hub, metal dust cover, plastic outer cover, sprocket, lock ring, rubber gasket, motor assembly, axle nut.  The two white dots on the motor must align with two corresponding red dots on the hub.  Aside from some fiddling with the sprocket lock ring, assembly was straightforward. On the non-drive side, a rubber cover can be placed over the Centerlock disc brake spline (not shown in the picture). 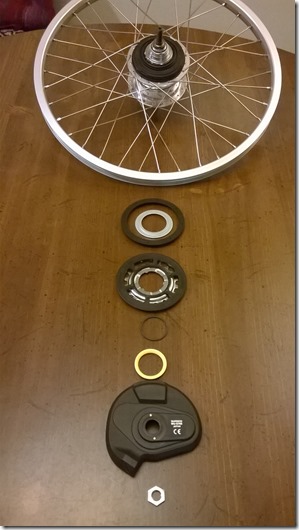 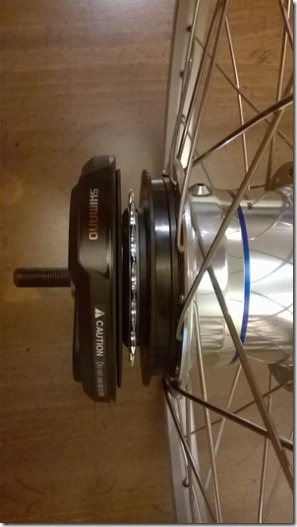 After installing the parts and doing some basic bench testing (more on that in a future post) I’m so far very impressed with the design and quality of all of the Di2 components.