It’s been five years since Slash, Zoe and I last made our traditional weekend overnight ride to Givens Hot Springs, about a 100 mile round trip to the Snake River and back.  Slash hasn’t been on a trike since completing our trip across the country.  It was past time to get back in the saddle, and this time around we recruited an accomplice. 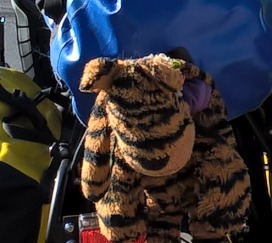 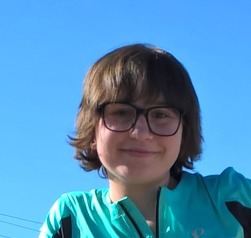 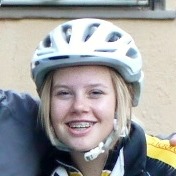 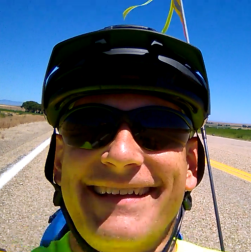 Here’s the iconic “before” picture.  The one that makes all the papers after tragedy strikes so that the public can lament “The poor sods had no idea what was coming,” and rationalize why that would never happen to them.  Because they would never do such a foolish thing. 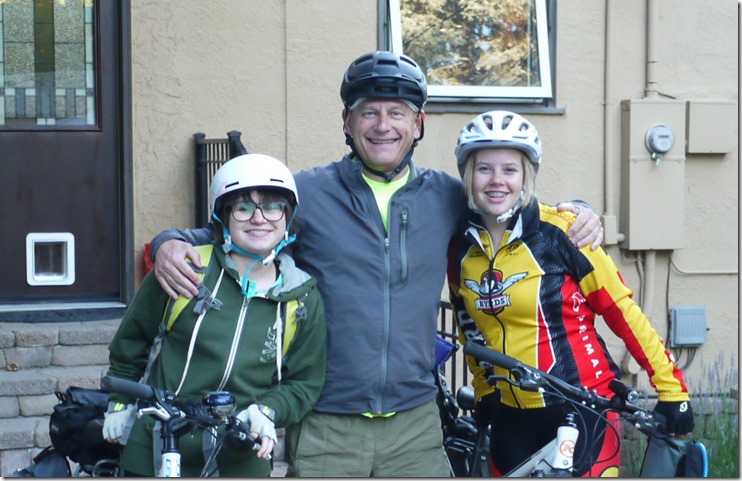 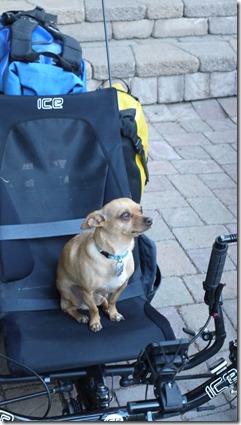 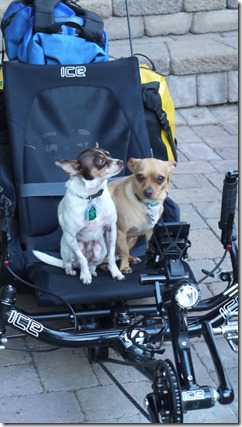 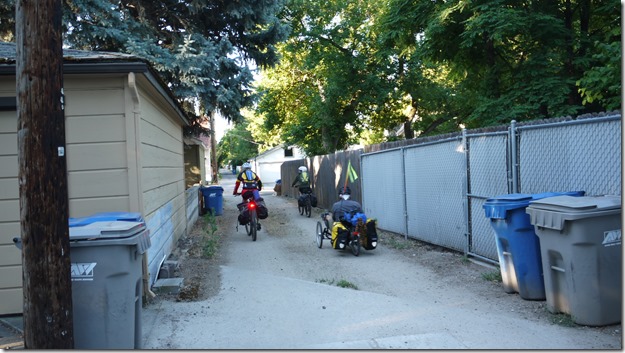 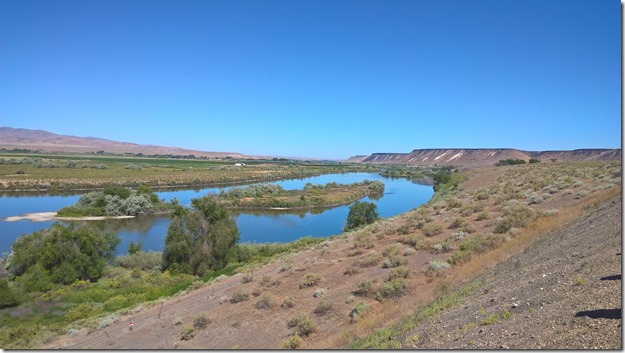 As it turned out, we beat the odds.  Defied fate.  Laughed at the gods.  We had a lovely time making a not-so-extraordinary ride in the country on a beautiful summer day.  It wasn’t without mishap—we got a lesson in tube repair on two separate occasions when Sage’s front tire was punctured by two different goatheads.  But that’s all part of the adventure, and we were prepared.  It gave us more time to hang out, cool down, and goof off.

In fact the girls are rather expert in the goofing-off department.  The ride was a non-stop, extemporaneous jabber-fest, punctuated by the occasional outburst of song.  The serious business of navigation and logistics fell to Slash and myself. 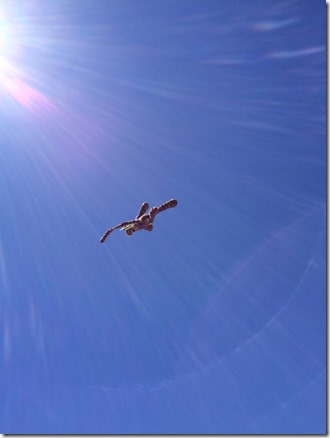 The less serious side of Slash 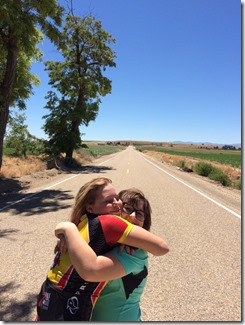 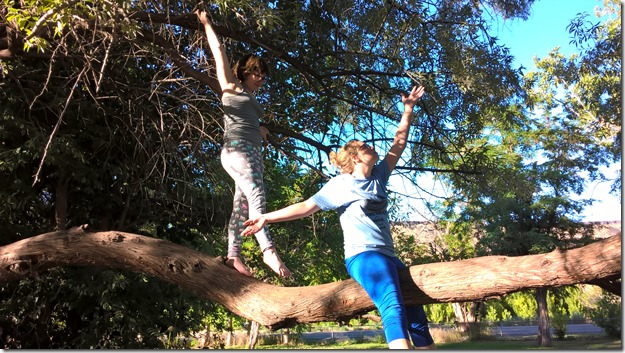 Goofing off has no bounds

Navigation.  I’ve done this trip enough times that I should have it down cold.  However there is an almost unlimited number of routes between Boise and Givens.  This time around I let Google Maps find me the flattest route, to appease my bathmophobic daughter.  I’m loathe to lavish praise on the nation-state that is Google, but their bike routing has become quite excellent.  I think it attempts to minimize elevation change, but even if it doesn’t, the elevation profile it provides makes it pretty easy to find the flattest route.

Unfortunately my own navigation app, CycleTrip, doesn’t have enough functionality yet to be useful so I relied on a combination of Endomondo (to provide a track) and Microsoft Maps (for routing).  Microsoft Maps in Windows Mobile 10 is decent, but has no concept of a bicycle.  WTF, Microsoft?  So I saved static turnpoints from Google Maps and viewed them on my phone in OneNote.  We missed a couple of key turns that way—fortunately all roads eventually lead to the Snake River.

I was able to gather some data to validate the overarching goal of CycleTrip:  Complete management of an extended bike tour from a single app on a single device, with no external power.  For this to work, my dynamo hub must produce enough power to operate a phone running GPS with the display at full brightness.  The ride verified what I’d seen on the bench:  The Schmidt dynamo hub is capable of running my Lumia 640 phone while configured for maximum power consumption, with a very slight amount of power left over to charge the battery.  We started the trip with the phone at full charge, and arrived at Givens with somewhere between 80 and 90% charge.  I used the phone a fair amount along the way for taking pictures, etc. without being plugged in.

At Givens I used the phone for a considerable amount of time (they have wifi!), and by morning it was down to about 13% charge (left on overnight).  On my solo trek back home, I got a low battery warning after stopping for more pictures.  But the phone gained a few points of charge on the remainder of the ride home, up to about 16%.  Within about 15 miles of home, I turned off the display for the remainder of the ride.  Endomondo was still tracking using GPS and I was playing .mp3s.  When I got home I was up to 36% charge.  So the key to making this work is managing the display, which is quite viable.  My Sinewave Reactor dynamo-driven USB charger worked flawlessly, with the headlight turned off. 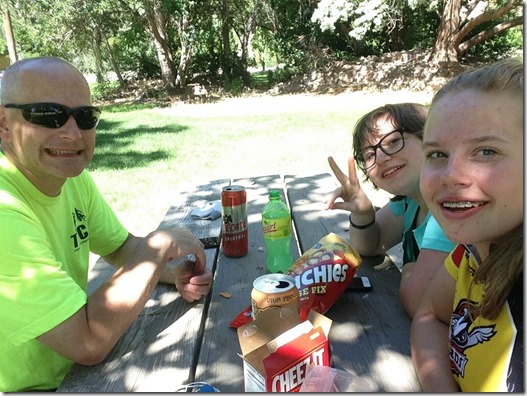 Back to the ride, we arranged it so the girls would have a choice for the return trip: ride with me or drive home with my wife.  It was no surprise that the girls chose the car.   Lisa woke them up Sunday morning with fruit and homemade burritos still warm from the oven.  And doughnuts.  I didn’t mind riding back solo—we had a blast on the way out, spent some quality time soaking in the hot springs, swinging, and playing Frisbee, and slept like logs in our tents.  No point pushing it with the return ride.  Especially not the wrong way up the big hill.  With no kids and no load, I flew up the hill and all the way back home.