The same functionality as a typical single-wheeled tagalong but of much higher quality even compared with the Burley Piccolo, and dramatically better performance (I’ve owned both).  Multiple recumbent seat angles plus the ability to lay the seat flat to form a platform useful for carrying cargo.  With two wheels and attachment to the axle of the tow vehicle, this thing remains completely stable north of 50 MPH.  Yes, my daughter and I have tested this.  The stability is particularly important when towing behind a trike– it doesn’t destabilize the trike the way a single-wheel trailer does.  The Trets includes a 7-speed derailleur, geared appropriately for cruising (a little high for crawling up steep hills and tops out well before my trike on downhills).

Has about 5,000 miles on it, including a trip across the US during which it performed flawlessly.  The paint has some blemishes after that much use but it’s in great mechanical shape, capable of many more adventures.  Selling because my daughter has outgrown it.  At least mentally– physically it would be no problem as the Trets easily accommodates small adults.

I added an Avid BB7 disk brake for parking/drag, a mount for a water bottle cage, and a mount near one of the wheels for a speedometer sender.  Also includes an extra Weber bayonet hitch for a second tow vehicle, or as a spare.  The Schwalbe Marathon tires have about half their life left (treads in good shape).   The brake cable has a lot of friction in it, needs to be cleaned or (maybe) replaced.  Designed to accommodate an optional front wheel that turns the Trets into a standalone recumbent delta trike for small people, not included.

This Trets in action:  Here and here. 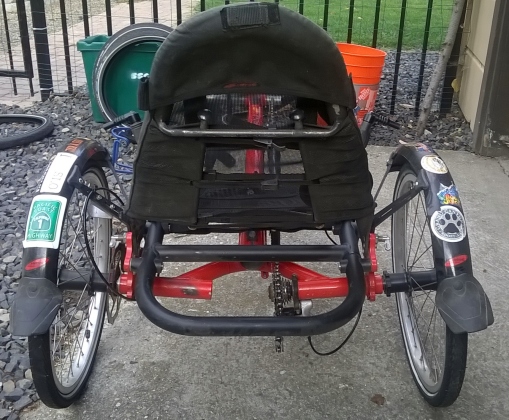