I’m still waiting on my order for 166mm spokes so that I can rebuild the Alfine wheel as a cross-2 to address the spoke angle problems of my original cross-3 build.  Apparently spokes this short are pretty hard to come by but Cambria Bicycle Outfitter assures me I’ll have them in about a week.  Meanwhile the weather has dipped into the teens again and I’ve been stuck in a single gear for my work commute.  Last night I’d had enough and decided to throw what I have on the trike and see how it works.

For an initial road test I mounted everything externally using wire ties.  The battery fit nicely on the horizontal arm of the handlebar.  I had originally thought I’d use the SM-EW90-A cockpit junction but the display fit so well on the arm of the Mirrycle bicycle mirror that I used that instead.  This also reduced the number of unused ports that I’d have to plug.  I’m not sure yet which I’ll use long term.  Note that I’m using an old mirror mount with the (broken) mirror removed.  Imagine a mirror to the right of the display.

The shifter and mirror are mounted as I expect they will be in their final configuration except that the shifter wire will run inside the handlebar tube.  A 1200mm Di2 wire connects the motor to the junction box, located on the black horizontal section of the handlebar near the first bend upward.  A 650mm wire connects the junction box to the display.  The 1200mm wire is barely long enough to pull this off and the 650mm wire is quite a bit too long, but it will work until I do a more permanent installation.  The junction box has one unused connector which is plugged. 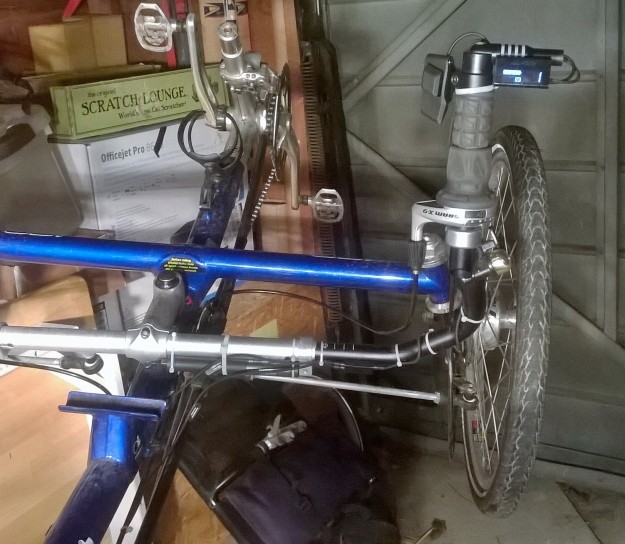 I kept the rear derailleur to act as a tensioner– this will be replaced by the Alfine tensioner for the final configuration.  I actually replaced the rear derailleur with a short cage SRAM X-9 I had laying around because the long cage is unnecessary with a single cog in the rear, handling the existing 26-36-48 front chain rings with ease and with much improved ground clearance.  I also replaced the chain because I didn’t want to wear the new Alfine sprocket with my very worn chain.  For what it’s worth, the gear range of this configuration is pretty good although the combination of the smallest front chain ring with the rear sprocket exceeds Shimano’s load limit.  This is academic as I have no need to shift out of the center ring for my work commute and won’t have a triple in front for my final configuration.

I had one surprise when mounting the Alfine wheel onto the ICE Q rear dropout.  A tab used to route the rear shift cable interferes with the Alfine motor.  I considered grinding it off– it’s intended for a derailleur with front cable attachment which I don’t use– but decided it won’t hurt anything for a temporary installation.  If I end up keeping the Alfine on this frame I probably will grind it off.

Now for the road test report.  In my whopping 1.5 mile commute into work today it worked quite well.  Shifting is almost silent (at least through the balaclava I used to shield against the 15 degree outside air temp) and I didn’t notice any rattle when going over bumps.  The cold didn’t seem to affect shift speed– it was very fast just like on the bench– but I did notice the return chain line jammed up when I backpedaled.  There is a fair amount of friction in the hub when freewheeling which I’m guessing will decrease as the hub breaks in and sees more normal temperatures.  Note that the Alfine is silent when freewheeling, no clicking.  Twice, as I was randomly and carelessly shifting through the gears under light load, I noticed what on an externally geared drivetrain I would call a “skip”.  This may be related to break-in, cold, or bad shifting technique but is something I’ll keep an eye on.  Once settled into a gear (instantaneous except for these two exceptions) the hub seemed quite solid.

The shifter works great where I have it mounted, even with heavily gloved hands.   As expected, I made a lot of inadvertent double-shifts.  The system is still configured for the fastest shift speed, I’ll probably back this off a notch or two.  I like the way the display hangs below the horizontal mirror arm.  It’s easy to read, takes up very little space, and it lets me rest my hand on top of the arm, a common hand position for me.  If I can come up with a clean way to route the cables I may stick with this instead of using the cockpit junction box for the final configuration.

With only about 10 minutes and a little over a mile under my belt, there is still much to be learned (and that could go wrong).  But so far Alfine Di2 looks really good.  Most importantly, I’m confident I’ll be able to shift on my frosty ride home from work tonight.  Braking, well, that’s another story.